I Underestimated the Power of This Profit Radar

One of the classic books of technical analysis is Technical Analysis of Stock Trends by Robert Edwards and John Magee.

It was first published in 1948, but was largely a rewrite of a book published in 1932. The author of that book had died and his son-in-law, Robert Edwards, re-publicized the ideas under his name.

Common sense might tell you to read the more recent edition. After all, the extra 16 years between publications must mean the author learned something new, and worth knowing, that’s included in the 1948 release.

Though, if your goal is to truly understand chart patterns, it could be best to read the original book rather than the more popular interpretation.

That’s a common approach in many fields. Physicists, for example, often read all the original research they can find on a topic before they begin their own project. This helps them to avoid wasting time discovering what’s already known and helps them advance their field.

It’s an exercise in learning the base fundamentals of a field — often giving a valuable perspective of how people interpreted the field in its infancy. It can contribute to a more profound understanding in the present.

This has long been the approach in science. The idea dates back to at least 1675 when Isaac Newton wrote, “If I have seen further, it is by standing on the shoulders of giants.”

I was reminded of that quote, and this approach, while thinking of the recent work of my friend and colleague, Chad Shoop…

Chad’s developed a new strategy that relies on the Profit Radar screen. He’s essentially taken a new and not frequently used chart indicator called the Relative Rotation Graph, and tuned it with proprietary code to help identify stocks and areas of the market that are breaking out.

What’s interesting is, this idea can be traced all the way back to a core discovery in physics from over 100 years ago.

Radar was first demonstrated in 1904. In that experiment, a signal was reflected from a lighthouse and got picked up by a similar antenna attached to a ship, producing a bell sound. The ship’s captain could then know the precise distance to the shoreline. At the time, naval authorities weren’t interested.

But scientists in Great Britain noticed the work and understood how it could help them defend their island. By 1935, they had a plan for detecting inbound aircraft. By 1940, radar played a crucial role in the Battle of Britain.

By using his proprietary code, he’s tuned the Relative Rotation Graph to emit signals not unlike those of early radar technology. When a stock makes a specific move relative to the index it’s contained in, it produces a signal that shows up as a blip on the Radar in a strategic position. This is Chad’s sign to recommend a trade to his readers.

Often, these signals produce excellent gains in the options market. Using this radar, Chad’s been able to set his readers up for gains of 109%, 137%, and even 246% — all in the span of a single day.

Chad’s Profit Radar is based on work that I’d first seen about 10 years ago, but didn’t think was very important. I thought it was little more than a visual approach to the math that I could do in a spreadsheet.

But a few years ago, Chad showed me how he altered it to suit his needs, and I was blown away.

He had developed new insights in this indicator and made it as useful to a trader as radar was to the military in World War II.

In essence, his Profit Radar is an early warning system — identifying stocks and indexes as they are breaking out. Rather than waiting weeks for trends to unfold, Chad gets into trends as they first appear.

It’s a powerful strategy for any trader to have in their toolkit. And Chad’s just about to release a presentation that shows the power of it in far more detail than I possibly could here.

Markets are inherently unpredictable. There’s really nothing more valuable to navigating their choppy waters than a finely tuned radar and an expert at the helm. You can find both in Chad’s presentation.

If you haven’t already, be sure to sign up here before it releases next week, so you’re one of the first to see it.

Before I go, I’d be remiss if I didn’t address this question from an aspiring options trader:

I am very new to the investment field. The reason I’m joining the field is because all my cash is stored in a bank CD.

Nowadays, banks don’t offer much interest. This situation forces me to invest my cash in the stock market.

I never invested any money in the stock market before because my husband handled all the money. But I know he lost a lot of money in 2000.

After he passed away, I put all my cash in a bank CD. But now, I am starting to learn how to invest. I read several books and subscribe to 5 newsletters. Three are Banyan Hill and two are Oxford Club.

I keep very busy with my reading, and check the meaning of terms and concepts if I I don’t understand them. I spend at least 8 hours a day reading.

Now I’ve learned the basics of how to invest in stocks. There’s still a lot to learn. But I want to learn options too.

Thank you so much for reading my long email. You have a great day! God bless you and your family!

Hi Mimi, thank you for writing in. I’m glad to hear that you’re taking a more active role in managing your wealth.

I don’t want to disappoint you, but no, One Trade is not right for you, or for anyone just dipping their toe into the options market. It requires a firm grasp of fundamental options concepts and targets higher returns in exchange for a higher level of risk.

If you have a good chunk of capital to work with, you should consider Chad’s Pure Income as a starting point to learn about options while continuing to read our daily True Options Masters emails. This strategy, while it does have a learning curve, allows you to draw income from the options market by selling option premium. It’s a far safer starting point for a new option trader, so long as they have the capital to work with.

We don’t currently have a video presentation about Chad’s Pure Income strategy, but you can call our sales team at 1-877-422-1888 and they’ll tell you all you need to know about it.

While I would like to have you as my subscriber, when I managed money, I saw many people who had lost money in 2008 and in 2000. They weren’t ready for an aggressive strategy and I started them with a conservative approach that relied on bond funds. If I had rushed them into an aggressive strategy, they would panic in a pullback and their emotions would lead to bad decisions.

I don’t want that for my readers. I want them to start learning with a safe, conservative approach, and that is Chad’s income strategy. Follow that for six months and see how you feel. Don’t look at your account balance — see how you feel about options. Are they stressful or fun? If it’s fun, both Chad and I offer strategies that provide more fun.

You should also know that my writings about the ETF strategy lately are a testbed for a brand-new trading advisory that we aim to offer at a far more affordable cost, within the next 3 to 6 months. So long as you continue reading True Options Masters, you’ll learn all about this strategy and be the first to know when we’ll release the advisory to the public.

If your husband was here, I think he’d say go slow. You are learning, and that is good. But don’t rush your education. You have time.

Chart of the Day:Time for a Retest 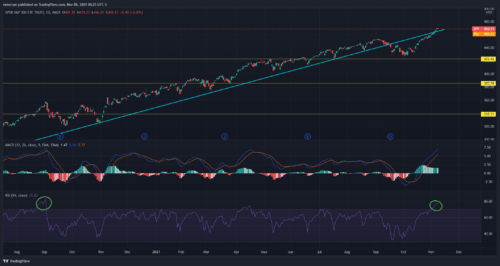 On a daily basis, the S&P 500 ETF (SPY) is now at its most overbought level in over a year…

Just as it reclaimed the long-term blue trendline I pointed out last week.

This is to be expected, really. For SPY to reclaim the trendline and not reject off it, which I wrongly projected in that same Chart of the Day, it needed a lot of momentum to carry it through. Now, things need to cool down so the overbought conditions can work themselves out.

A continued fall and retest of the blue trendline would be appropriate action for the coming days. That gives us a SPY target of about $465.

I also expect SPY to chop around this level for some time, before slowly starting to grind higher as we continue into the holiday season. That’s what we would need in order to mount a more healthy and sustainable rally and finish the year strong.

The Surprising Stocks Set to Soar Next August 30, 2020
Previous Post Chip Demand Is HOT! Get the Stocks
Next Post 3 Ways to Spot Blacklist Stocks to Sell